History of La Dolce Via

Discover the history of La Dolce Via, which dates back to 1886… 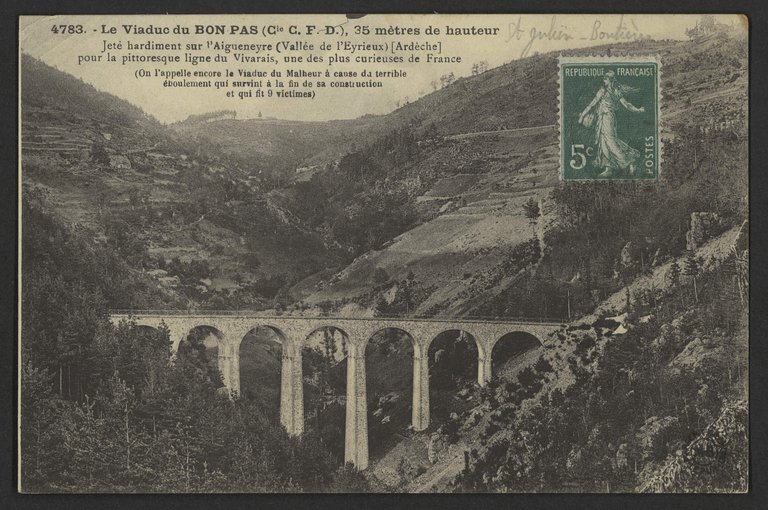 It was in 1886 that the railway company of the Ardèche, the Compagnie des Chemins de Fer Départementaux, began the incredibly ambitious project of building a railway between La Voulte and Le Cheylard. Despite the extremely high construction costs, the line was inaugurated on Thursday, 10 September 1891. The trains were made up of compartmented carriages for passengers, a technological advance that enabled the inhabitants of Le Cheylard to travel to Valence in under three hours, compared with eight previously, and to Lyon in under six hours. The average speed rarely exceeded 20km/h, yet problems frequently occurred on this line: a derailment in 1891 following a mudslide at Saint-Sauveur-de-Montagut, breakdowns and poor rail quality are some examples.

In 1898, it was decided to build the second network, from Le Cheylard to Saint-Agrève, and work began the following year.

This section must have been hugely challenging: the difference in altitude and the large number of ravines and gorges in the area of Les Boutières required the construction of several tunnels, viaducts and huge cuttings. In 1903, the first train from Le Cheylard entered the station at Saint-Agrève.

This second network also included the construction of a line between Le Cheylard and Lamastre. Here again, several viaducts had to be built to ascend the valley leading to Les Nonières and then descend to Lamastre. The first train to circulate on this line set off on 11 July 1903. From then on, the station at Le Cheylard became the centre of the network, home to the locomotive maintenance and depot. Besides passenger transport, the trains proved very useful for transporting goods, especially fresh fruit to be sold on local markets, or sent further afield, beyond the confines of the Ardèche. Traffic was reduced, never to recover, as a result of fuel shortages caused by the two World Wars. Then, despite the use of faster and more efficient locotractors and railcars, passenger and goods traffic dwindled continuously in the face of stiff competition from the roads.

On 1 November 1968, by a ministerial decision and after a decade of hesitation, the CFD ceased operation of the Dunières-sur-Loire/La Voulte-sur-Rhône line. The tracks were removed soon after and the disused line ceded to the municipalities.

Until recently, people made use of the line by all means of transport, motorised or otherwise. The absence of safety amenities, suitable surfacing and any form of publicity stood in the way of tourist development, even though pedestrians and cyclists were already frequent users.

In 2001, the decision was made to transform the former railway line into a voie douce, a road primarily for non-motorised use. Work began in 2006. The first section to be renovated was between Saint-Laurent-du-Pape and Saint-Fortunat. Under the impetus of the communities of municipalities in the valley, this was followed by Saint-Vincent-de-Durfort/Chalencon, Saint-Julien-Labrousse/Le Cheylard, Le Cheylard/Intres and Le Cheylard/Lamastre. Since spring 2018, the Intres / Saint-Agrève section, as well as the link with the ViaRhôna at La Voulte-Sur-Rhône have been finalised.

On 28 February 2020, La Dolce Via was voted Cycle Route of the Year 2020 in the Netherlands at the  Fiets en Wandelbeurs trade fair in Utrecht. The jury evaluated the four competing routes according to the following criteria: signposting, quality, road surface and originality of the theme. According to the jury, La Dolce Via meets the criteria for the cycle route of the year from all sides: "A beautiful route through a magnificent landscape with unique views", said the jury. "The route is almost entirely car-free and the cyclist enjoys the peace and space. Facilities such as benches and picnic tables invite you to take a seat". According to jury chairman Bert Sitters, investments have clearly been made in the route with a love of cycling. "La Dolce Via is an example for other developing routes".